Things to do in and around Faro/Albufeira

In July 2020, I had the chance to visit the Algarve and I was totally fascinated by its beauty! That's why I want to share my favorite things to see/do in and around Faro/Albufeira.

Things to do in Olhão: 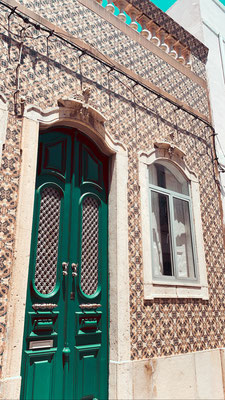 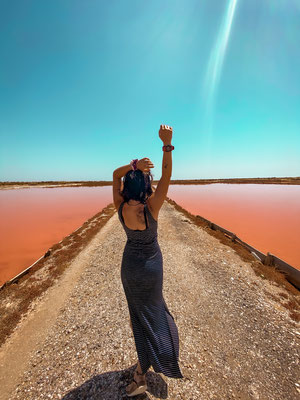 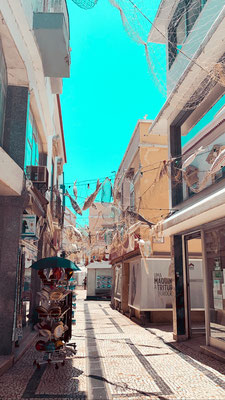 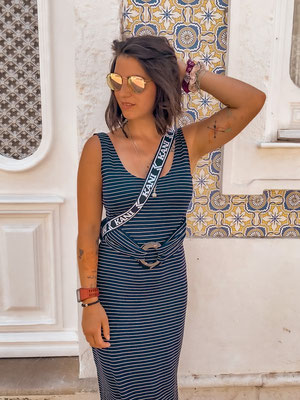 2. Take a ferry/shuttle to 'Ilha Deserta', the desert island

Ilha Deserta is a beautiful little island close to Faro. You can reach it easily by Ferry or Shuttle (fast boat). Departure from Faro: Each 30mins. I took the shuttle to go to the island and the ferry to return to Faro. Note that the ferry is slower but also cheaper.
Another tip: Bring enough water with you (it is hot on the island). There is a little restaurant on the island but we all know that water costs a lot in restaurants. 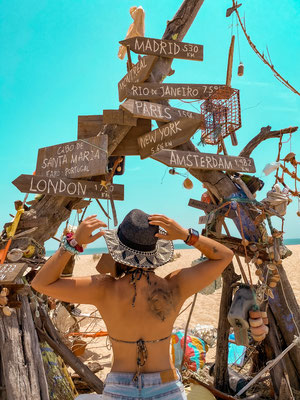 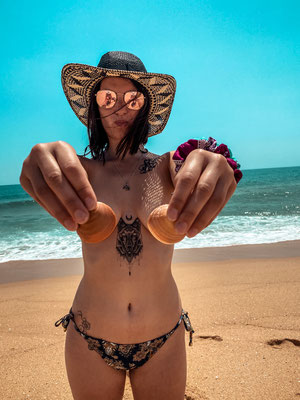 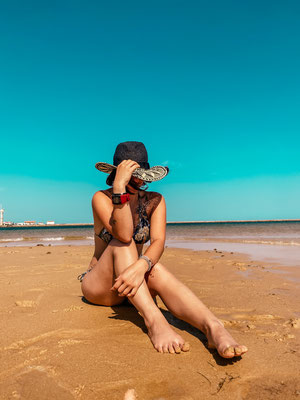 3. Eat yourself into a 'Food Coma'

There are a lot of very nice Restaurants especially in Faro. Albufeira is more touristic and therefore it is a bit more difficult to find the good restaurants. But you can find literally every kind of food; from Indian food to Italian and Portuguese.

Faro itself is a cute little city with a very beautiful old town in the city center. Take your  time to walk around and get lost a little.

Some ideas what to do in Faro: 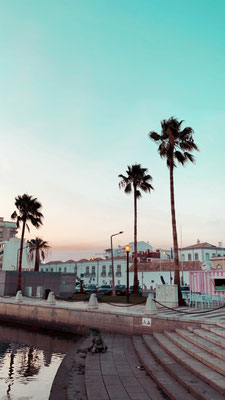 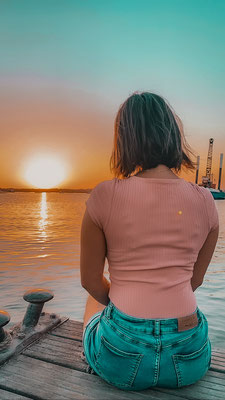 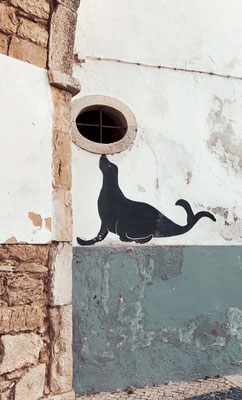 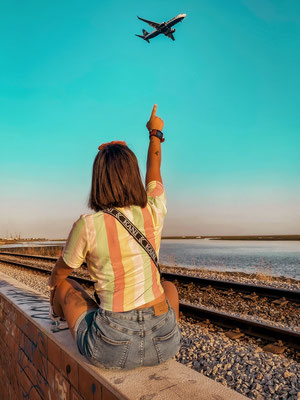 When I planned my trip to the Algarve, I realized that it is a very good places to see dolphins. I've never seen wild dolphins before but it was always on my bucket list so I booked a dolphin tour from the Marina de Albufeira. At the beginning I was very skeptical because
a) I'm usually not the 'tour-booking'-kind of a person
b) because the tour wasn't cheap
c) nature doesn't care about people who want to see dolphins, so there was a chance that I wouldn't see dolphins on the tour.
However, I decided to go on this tour anyways and it was absolutely worth the money!

Firstly, the speed boat (and by speed boat I really mean speed boat ^^) drove out into the Atlantic Ocean. After a while, there were around a dozen of dolphins very close to the speed boat! It was a dream. I couldn't take my eyes off of them. They looked so happy and it seemed like they had a lot of fun swimming around the speed boat. Unfortunately, we didn't stay there for a very long time; or maybe it just seemed shorter than it actually was.
After seeing the dolphins, the tour wasn't over. The boat drives along the coast to some of the famous caves and then after some time it returns to the Marina de Albufeira.
The company I booked the tour with is called Seacret Tours.
By the way: The Marina of Albufeira with its colorful buildings is a very nice place to take some fancy pictures. 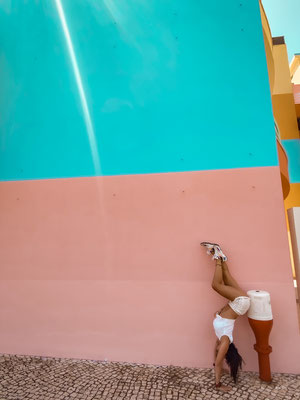 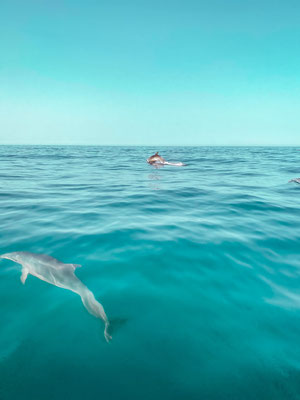 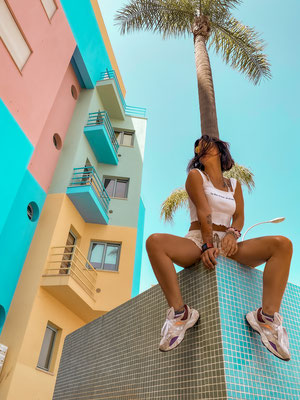 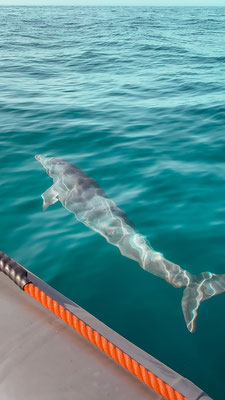 First of all, let me say that even though this cave is veery touristic, it is still worth a visit. The most important thing, if you'd like to be (almost) alone in there: Go as early in the morning as possible!

Make sure that you check the tides first and go there only during low tide.

I like it a bit more adventurous and special, that's why I decided to spontaneously book a sunrise Kayak tour which I found on Airbnb. This private tour, called 'The Ultimate Tour to Benagil' started early in the morning (5.30 a.m.) and was a real highlight. On the way to the Benagil cave, we first watched the impressive sunrise and then continued the journey by visiting some other nice caves before reaching the Benagil cave. However, we reached it still earlier than most of the other tourists (there were around 4 to 6 other people inside of the cave).
A private tour of course is a more expensive way to visit the cave. If you travel on a low budget, I'd recommend you to swim or rent a SUP/Kayak. 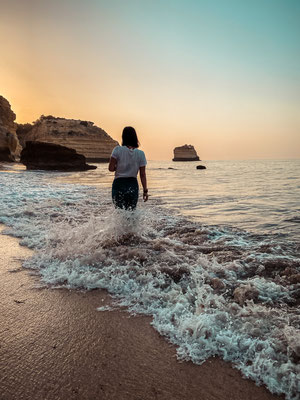 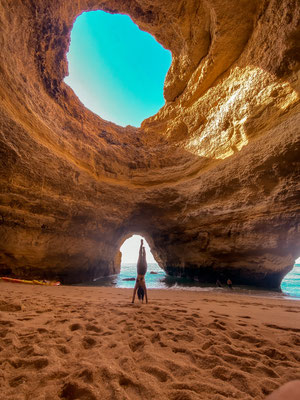 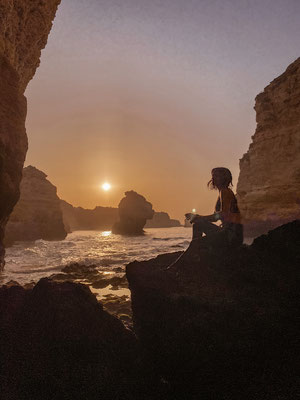 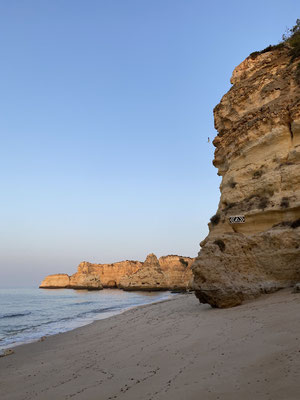 I totally recommend you this impressive hike which is called 'Seven Hanging Valleys Walk'! You'll be amazed by the beauty of those cliffs, I promise.

During the hike, you'll pass

Some advices for the hike: 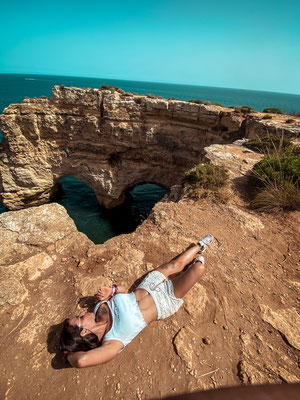 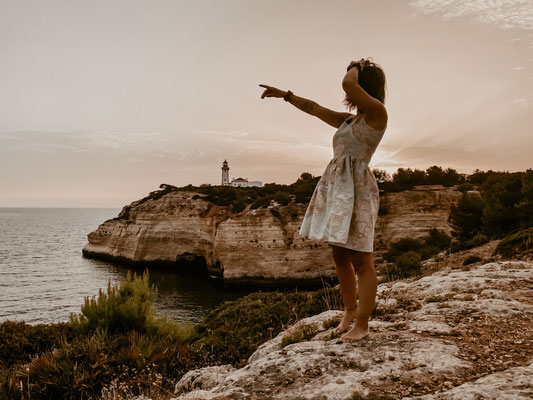 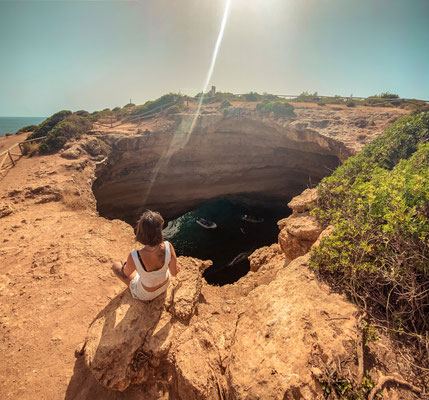 Have you ever visited the Algarve or is it on your bucket list? If you've already been there, what did you like the most?

If you like my blogpost about the Algarve, you'd make me very happy by leaving a comment :-)

Sending you lots of love and please stay safe!